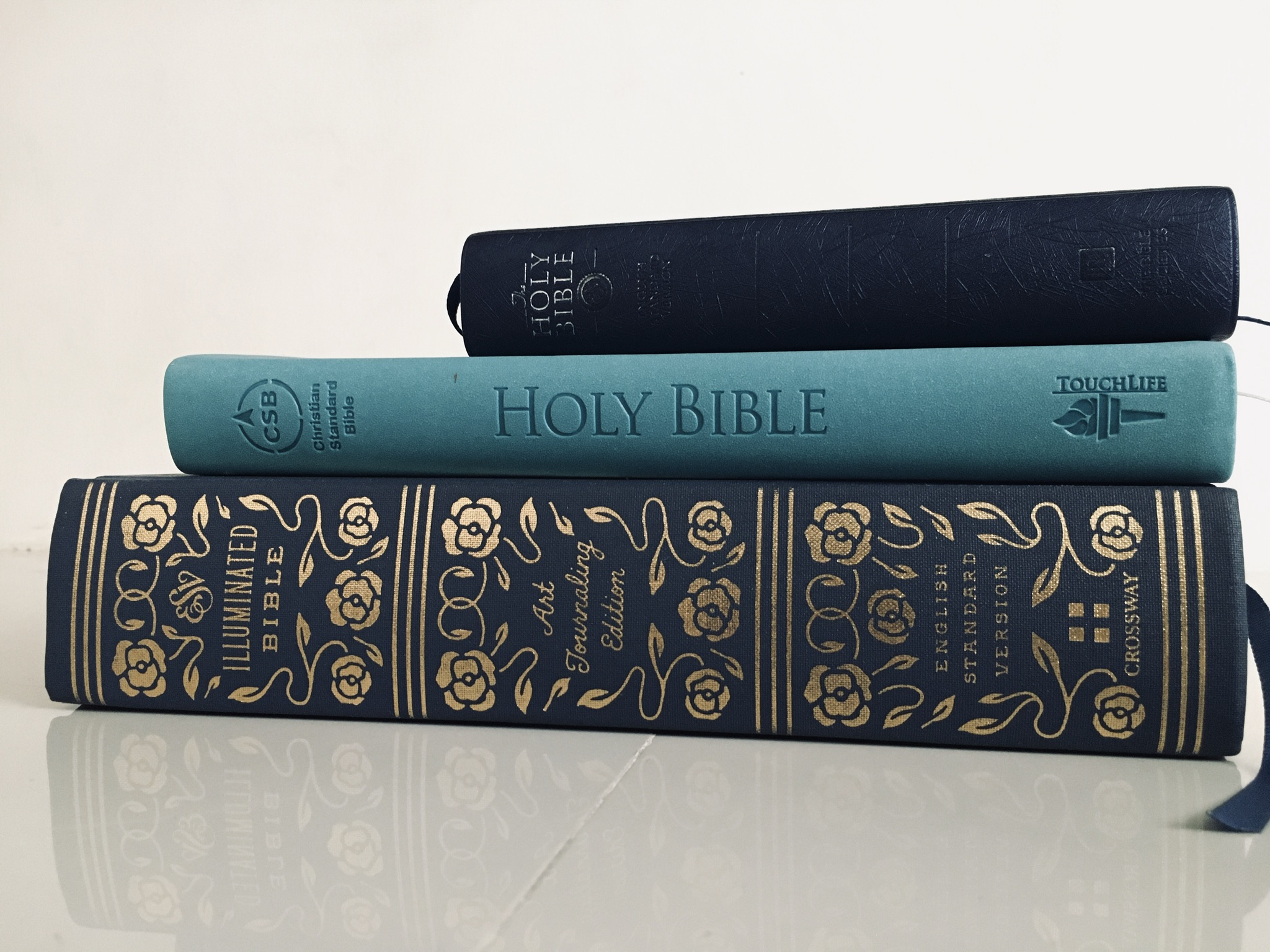 Today, various English translations of the Bible are available, and that is a good thing. One common question thought that comes up from people who want to dig deeper on the Word of God is what translation to use. As such, I decided to write this simple guide.

Why are there many translations in the first place? Can we not settle for one? Well, we start by saying that only the original text is inspired1 by God. The moment it is copied or translated, imperfections can be introduced to the text. The copying issue is addressed by scholarship effectively that they say 95-99% of the Bible are preserved from the original text. However, the translation issue is not that easy.

There are two philosophies in language translation. To keep things simple, we’ll use the more familiar terms. These two are the word-for-word and the thought-for-thought philosophies. The goal for word-for-word is to translate every word of the original text into an equivalent word or phrase of the receptor language as much as the meaning allows. For thought-for-thought, the goal is to translate the meaning in such a way that the reader could easily understand it. Let’s illustrate it in the case of English-Filipino translation.

English: He is grieving the loss of his father.

In the word-for-word translation, almost every word has been translated to an equivalent Filipino word, even retaining the tense of the verb and the voice of the sentence. However, not all Filipino speaker knows the word “dalamhati”. Also, Filipinos do not normally speak in the active voice in daily conversations. Now, here is where thought-for-thought comes in. In the latter example, “grieving” was translated as “matinding lungkot”, which is understandable virtually to all Filipino speakers. Moreover, it is in the passive voice, which is the more natural way that Filipinos speak. Another point to note is that in the latter example, “pagkawala” was interpreted and translated as “pagkamatay”. This was just a single sentence. Imagine the tension for a whole Bible.

With this in mind, let’s look at the following Bible translation chart. Then I’ll comment on each translation that I have used.

This translation is used mostly by conservative Christians since it is the most literal among commonly used translations.2 Indeed, the NASB is a good translation and the plus features are the explicit rendering of quoted Old Testament verses in capital letters and the rendering in italics of added words to clarify certain texts. My church uses this translation, as well as my Dgroup leader. The common comment for NASB is it is hard to read and sounds wooden, which is naturally a consequence of being an extreme word-for-word translation. One of the pastors that use this translation is John MacArthur.

In recent years, the ESV has been gaining popularity among evangelicals. Its publisher Crossway has been very good in marketing it as they came up with excellent study Bibles and journaling Bibles over the years. I myself am using this as my main translation (more on this later). What I love about the ESV is that it maximizes being a word-for-word translation but is easier to read than NASB. I chose ESV over the NASB because I want to use a single translation for reading, studying and memorizing. I may study better in NASB, but for sure I will be having a hard time memorizing it. One of the criticisms of this translation though is that it is biased in the reformed camp. That’s probably true (haha), but as I am also using other translations, that criticism might be more appropriate on their Study Bible and not so much on the Bible itself. Some of the pastors/scholars that use this translation are John Piper and Wayne Grudem.

I decided to lump these two versions as the NKJV is a modern update of KJV. For a very long time, KJV undoubtedly was the best translation. It stood the test of time as it was first published more than 400 years ago already. Even the culture is affected by this translation, as some of its verses became popular quotes, owing to the beauty of its English. However, it soon became obvious that there needs to be an update of its archaic language. Thus, the NKJV. Now for the most part, NKJV is an accurate translation. One significant issue of both KJV and NKJV though is its Hebrew/Greek basis. I do not want to dive deep into academic discussion here, but to put it simply, scholars have determined that some passages were just added on the original text and therefore are uninspired. Virtually all modern translations exclude these verses/passages (or some translations put a note). The KJV and NKJV, on the other hand, chose to retain these verses. Unfortunately, some groups have turned this around and suggested a conspiracy that other modern translations are distorting the Bible. If you want to know more about this, you can check this debate. R. C. Sproul used NKJV when he was still alive.

From this point on, we will be discussing thought-for-thought translations. CSB is a fairly new translation, but it is based on an older translation named HCSB. I started catching wind of this translation when I read some journals on Bible translations. What I love about the CSB is the abundance of its cross-references, at least in the Youversion Bible app. I’m not sure about the hardcopy. This feature is very handy in studying, as I get to compare a certain verse to other parts of the Bible which may give light to its meaning. According to the CSB website, its translators belong to different denomination (as opposed to the criticism of the ESV). The disadvantage of CSB is its location in the spectrum which means that some theological words were translated to more familiar terms such as propitiation into mercy seat. It complements this adjustment by the use of footnotes.

For most people of our generation who grew up in Christian churches, especially the non-denominational ones, NIV has been the Bible translation that we have been mostly familiar to. Though some conservative churches might find it dynamic, it has undoubtedly been a good translation for a long time. However, since its merge with TNIV, it has come under fire from being progressive, especially in its use of gender language. If you want to continue using NIV, I advise looking for its 1984 publication. Otherwise, you are better off using another translation.

As can be observed from the chart above, NLT is at the end of the thought-for-thought spectrum and is nearing the paraphrase section. For this reason, NLT can be quite loose in its translation. Also, in its preface, it says that its translation process involves English stylists working alongside the biblical scholars. Needless to say, it was very intentional in bringing the Bible to contemporary English. Alongside the NASB, Charles Swindoll uses the NLT in his books.

A Note on The Message and The Passion “Translations”

Although none of the previously mentioned translations are perfect, any one of those can be quite formidable when used properly. The Message and The Passion “Translations”, on the other hand, should not be given the same credit. At best, they should be considered commentaries. At worst, they are distortions of the Bible. Even the fact that only a single translator solely worked on each of this translation should raise some warning. TPT goes a little further because its translator is not even a biblical language scholar, and have added so much on the original text.

So what’s the best translation?

Normally, we would want to use word-for-word translations as they tend to be more accurate. However, they also can be quite hard to understand for some. So my advice is this. Try using NASB or ESV for a certain period. Then see which is more suitable for you. If you have a hard time understanding both, try the CSB. Hopefully, that would work for you as other options are either too much on the thought-for-thought or would include uninspired passages.

As I’ve mentioned earlier, I use the ESV as my main translation. But I also check the others from time to time, especially if there are verses that are hard to understand. Normally, I jump from ESV to CSB to NLT, while keeping in mind their places in the spectrum. I look at CSB for a different perspective on the text. I look on the NLT as well to have an idea in its interpretation, while not yet reading a commentary. Checking the original Hebrew/Greek can also be quite helpful but do so with caution if you are not a biblical language expert. I also check the NASB or CSB for New Testament verses that quote the Old Testament. Doing so can shed clarity on the context of the NT text.

Bible translations have never been so much accessible as today. And I’m afraid most Christians are not yet taking advantage of this fact. I can imagine William Tyndale, The Father of the English Bible, being frustrated with us.3 As I end, let me quote one of my favorite verses:

The secret things belong to the Lord our God, but the things that are revealed belong to us and to our children forever, that we may do all the words of this law.
Deuteronomy 29.29

I’m amazed that God could have kept His character a secret, yet He revealed Himself to us. He is under no obligation to do so, yet He did it anyway. And we have access to that through a book. Oh, the simplicity! Yet as we get to know Him through His word, we understand that meditating, studying and memorizing His word is actually a means for us to be conformed to the image of His Son.

This article was previously published by the author of this site as a Facebook note. Slight changes were done here.